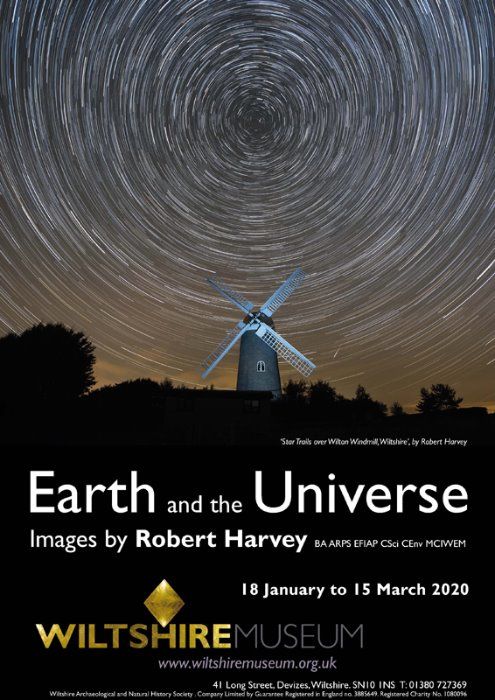 18/01/2020
My landscape astrophotography exhibition opens on 18 January 2020 at Wiltshire Museum in Devizes.

For thousands of years, people have been fascinated by the beauty of the night sky. But it is only in the last century that we have discovered the huge scale of the Universe that can be seen by our unaided eyes. More recently advances in digital cameras have enabled us to photograph fantastically distant objects in unprecedented detail and this exhibition presents images of the Universe over spectacular landscapes on Earth.

All the photographs were taken with a regular digital camera and none used a telescope. However, a digital camera can record much more detail than the human eye. It reveals the colour of an aurora, the trail of the International Space Station, dazzling beads of brightness at the end of a total solar eclipse, five planets in one image, a dark sky studded with countless stars, the Milky Way arching between opposite horizons, and structure in an unimaginably far-away galaxy.

Photographer Robert Harvey has travelled throughout the UK and overseas to capture the images in the exhibition. Many were taken at stone circles, long barrows and follies in his own county of Wiltshire, where the ancient past resonates through our landscape. Elsewhere in England he has photographed the night sky over sea stacks, rock arches, lighthouses, ruined abbeys and Lake District mountains. Images from further afield include stars over rock pinnacles on the Isle of Skye, the Northern Lights dancing above mountains in Arctic Norway and panoramas of the Milky Way over deserts in Utah, Jordan and Namibia.

Robert’s advice is “Be proficient with your camera. You need a thorough understanding of focus and exposure to capture images at night. But don’t let the technical aspects detract from your sense of wonder when you look at the night sky. From the shimmering Northern Lights to the complex structure in the core of our Milky Way galaxy, a view of the Universe is part of the common heritage of mankind”.
Next
Previous