A Glimpse of Prehistory 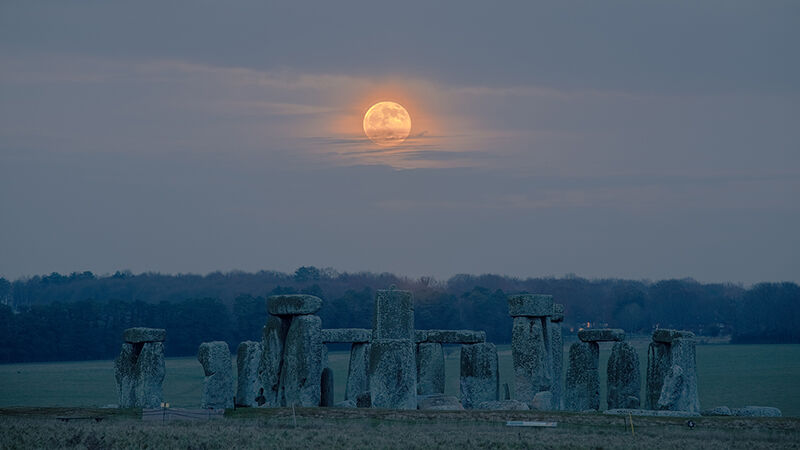 30/12/2020
Is this what midsummer sunrise looked like in 2500 BC?
It is well known that the main axis of Stonehenge was constructed to align with sunrise on the summer solstice and sunset on the winter solstice. However, the positions of sunrise and sunset were not the same when Stonehenge was built 4,500 years ago as they are today. The earth's axial tilt has been slowly decreasing over time, from 24 degrees then to 23.4 degrees now. At the latitude of Stonehenge, this is enough to change the compass bearing of sunrise on the summer solstice from 48.2 degrees then to 49.3 degrees now. In other words, Stonehenge was built to align with a sunrise position that was about one degree further north than it is today. When people flock to Stonehenge to see sunrise on the summer solstice, they do not see exactly what the builders of Stonehenge observed.
Being approximately opposite in the sky to the Sun, the Full Moon rises at its most northerly annual position on the horizon in December. However, because the Moon's orbit around Earth is inclined to the Earth's orbit around the Sun by 5.1 degrees, that most northerly position of moonrise on the horizon each year varies over a 18.6 year cycle. Twice during that lunar nodal cycle, the December Full Moon rises (and sets) at the same position on the horizon that the summer solstice Sun rose (and set) at the time when Stonehenge was built. 30 December 2020 was one of those dates.
Moonrise was at 4.19pm, at which time the sky was heavily overcast and I was about to give up. Then at 4.49pm the rising Moon shone briefly through a little gap in the cloud, enabling me to capture this photograph.
Next
Previous